One of North Carolina’s biggest and most vibrant cities, Charlotte is great place to visit with children. We’ve picked out some of the best family-friendly activities and attractions to be found in and around it.

A profile view of a raptor at the Carolina Raptor Center (Photo: Hillel Steinberg via Flickr / CC BY-ND 2.0)

This living museum is dedicated to the rehabilitation, research and conservation of the world’s most impressive predators – birds of prey. The 57-acre centre, based in the Latta Plantation Nature Preserve, is home to 37 different species of native and exotic raptures. Kids love the self-guided nature trail, which winds across outdoor aviaries and provides plenty of opportunities to get a closer look at the most famous masters of the skies. Expect to see eagles, ospreys, owls, hawks, falcons and vultures. The nature preserve is around a 25-minute drive from Charlotte’s city centre.

Festival in the Park

One of the most eagerly awaited events on Charlotte’s cultural calendar, Festival in the Park has captivated all who attend since its inaugural edition way back in 1964. The music and arts event has grown and grown since those early days and now provides a showcase for over 150 local and national artists to present their creative wares, along with a stellar line-up of live musical acts. Much of the eclectic array of art on display is available to purchase and there’s also great food and drink, all served up against a dazzling backdrop of lights as the sun goes down. As for kids, there are endless events and activities suitable for all ages and tastes, including face painting, arts & crafts, live entertainment and more., 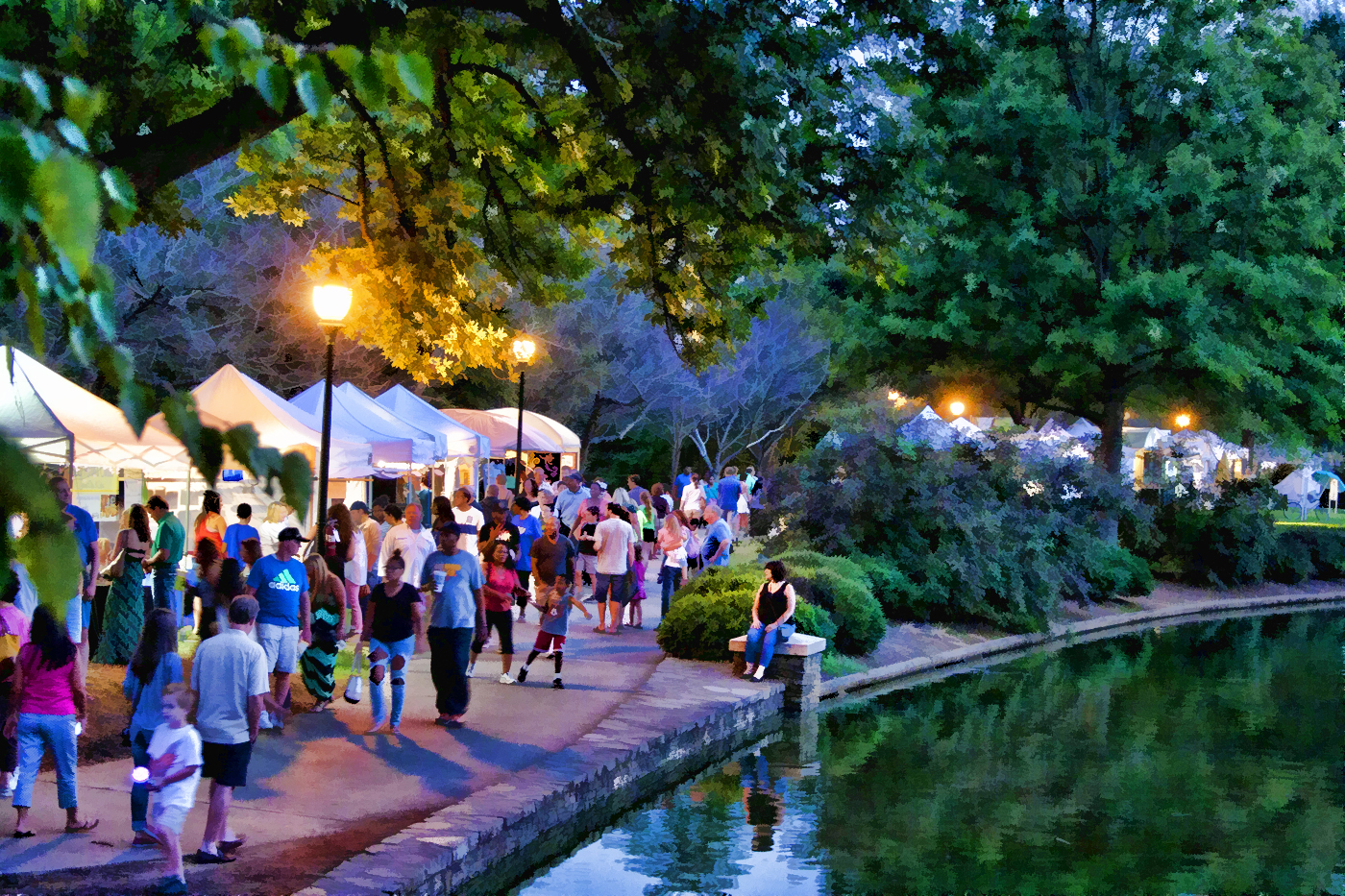 Festival-goers stroll along by a lake at Festival in the Park (Photo: Deborah Young Studio)

SEA LIFE has created immersive marine experiences across the U.S. for more than 50 years. What sets this location apart are the incredible exhibits telling the story of North Carolina’s rivers. Set in authentically themed habitats influenced by the local surroundings, kids can explore those hidden ecosystems with their own eyes. They’ll love the 180-degree glass tunnel too, home to sharks, rays and Carolina’s only rescued sea turtle, Neptune. There are more than 5000 marine mammals and tropical fish to see, but the real star of the show is Fiona, the feisty giant Pacific octopus. SEA LIFE is located on the outskirts of Charlotte, around a 20-minute drive from the city centre.

Located in the heart of Charlotte’s culture district, ImaginOn is guaranteed to capture the imagination of the whole family. Featuring two state-of-the-art theatres, a dedicated library for children under 11, four multi-purpose classrooms, a library for teenagers, a production studio and an interactive exhibit space, there’s something for everyone. In fact, the 102,000 square foot facility has been voted the best children’s space in the United States. The facility was created through a collaboration between Charlotte Mecklenburg Library and Children’s Theatre of Charlotte, with a mission to offer innovative programmes with storytelling at the heart. 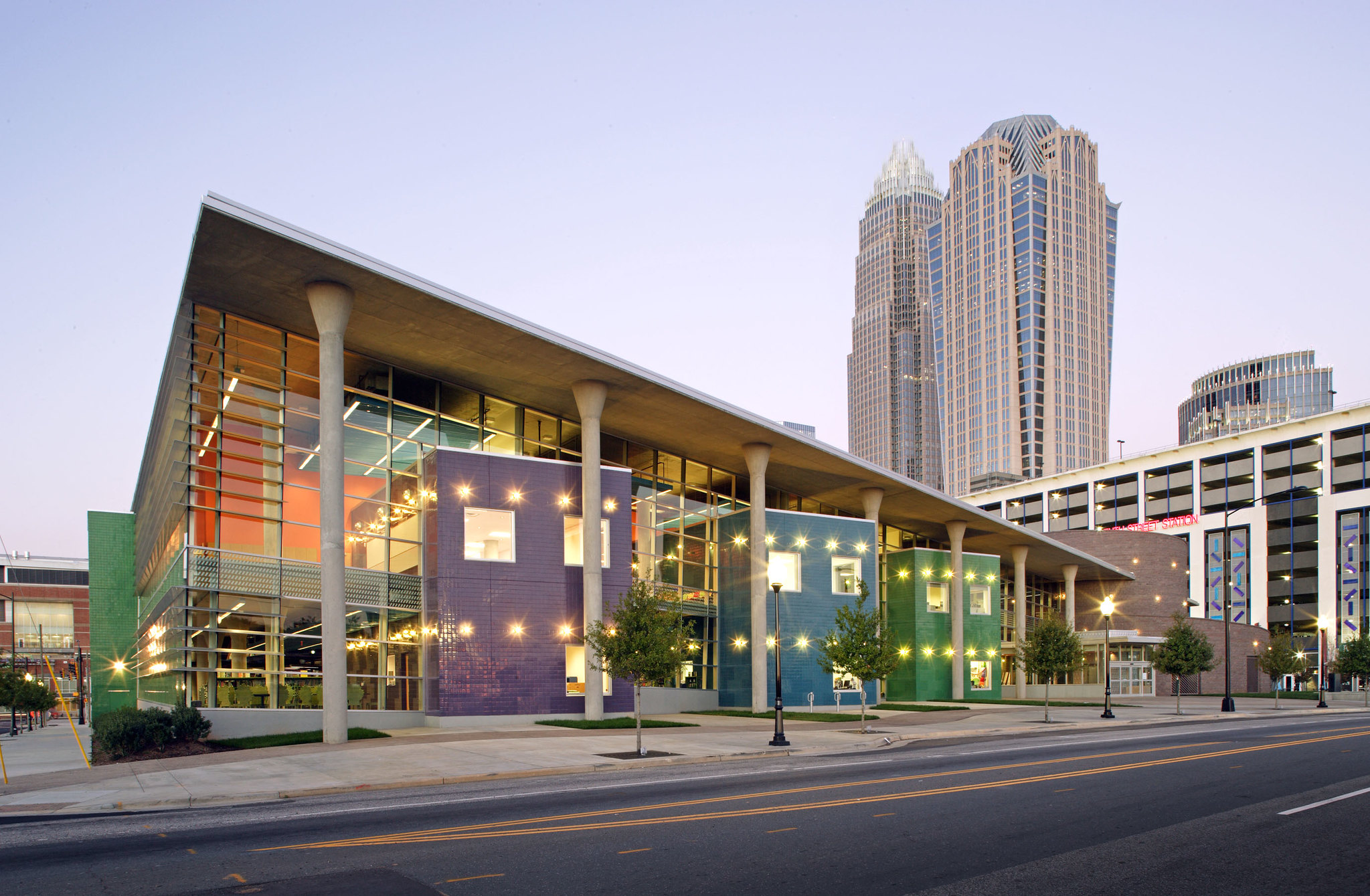 For fast – but family-friendly – thrills, head to Carowinds. The 407-acre amusement park is home to some of the best roller coaster collections in the world. It boasts two of the tallest steel roller coasters in North America, as well as the notorious Fury 325, a 325-foot monster of a Giga coaster that reaches speeds of 95 mph. For little ones, there’s Camp Snoopy, a dedicated 12-acre children’s interactive play area with games and rides. The park also offers an all-inclusive water park and a wide variety of cafes serving up authentic Carolina cuisine. Carowinds is located along the North Carolina-South Carolina state line and was created in the 1970s to bring the two states closer together.

A rollercoaster hurtles around a track at Carowinds (Photo: Steve Nuss via Flickr / CC BY-ND 2.0)

Founded in 1961, the Schiele Museum of Natural History has inspired generations of explorers, researchers and scientists. Kids can explore indoor and outdoor exhibits, a hi-definition planetarium and state-of-the-art science theatre. Family favourites include the Dino Safari, a Catawba Indian Village and an exhibit dedicated to the weirdest and wackiest animals and plants on the planet. For outdoor enthusiasts, there’s also a 0.7-mile nature trek, set through pine and mixed hardwood forest, ponds and streams. Along the way, younger kids can stop off at the Play’Scrape play area. The museum is located in the heart of Gaston County, a 25-minute drive from Charlotte City Centre.

Set on 1300-acres along the Catawba River, the U.S. National Whitewater Centre describes itself as the ‘world’s premier outdoor facility.’ With 30 different recreational activities to choose from, as well as the world’s largest artificial whitewater river, it isn’t difficult to see why. You could find yourself swooping across a 1000-foot zip line or traversing across rope bridges above forest and rapids. Some activities are restricted to children over 5 or 6, but most offer a more accessible option for little ones. Kids over 8 shouldn’t miss ‘The Deep Water Solo’, a unique type of rock climbing that relies on falling into deep water, instead of traditional climbing protection. 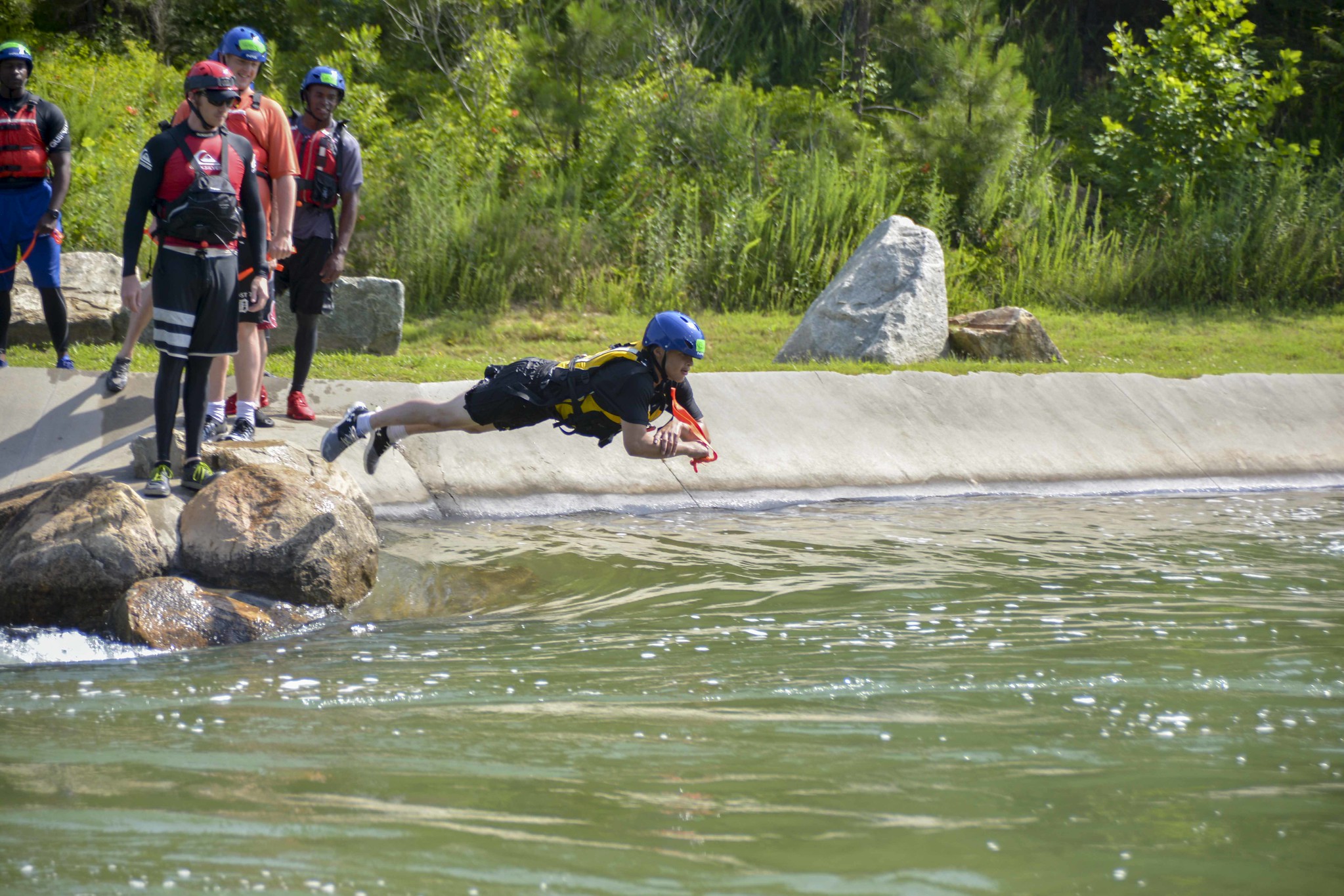 A thrill-seeker dives into the water at U.S. National Whitewater Center (Photo: The National Guard via Flickr / CC BY 2.0)

Perhaps more suitable for slightly older kids, this spine-tingling walking tour invites intrepid visitors to explore the scary side of one of America’s oldest cities. Organised and hosted by Charlotte NC Tours, the 90-minute adventure takes in creepy sites and landmarks including the supposedly haunted Tyron Street and Historic 4th Ward, as your guide regales you with spooky tales of yore. Guests are encouraged to take plenty of snaps along the way – and be sure to look out for any ethereal photo-bombs. 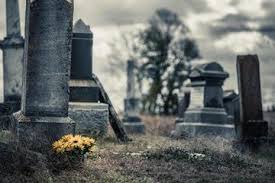 One of the creepy sites visited during an Austin Haunted Walking Tour (Photo: Charlotte NC Tours)

Conveniently located just outside Charlotte-Douglas International Airport, Carolinas Aviation Museum is home to an extensive range of aircraft, helicopters and flight gadgets. It offers a fascinating, family-friendly history of aviation, right from the Wright Brothers to cutting-edge modern day technology. There’s a comprehensive range of historic, commercial and military aircraft, including the famous US Airways Flight 1549, also known as ‘The Miracle of Hudson’. Kids can even get behind the controls of a few of them: the Cessna 150, Boeing 727 trainer, F-14 Fighter Jet and the Wright Flyer Simulator. A real treat for budding pilots and any kids curious about the power of flight. 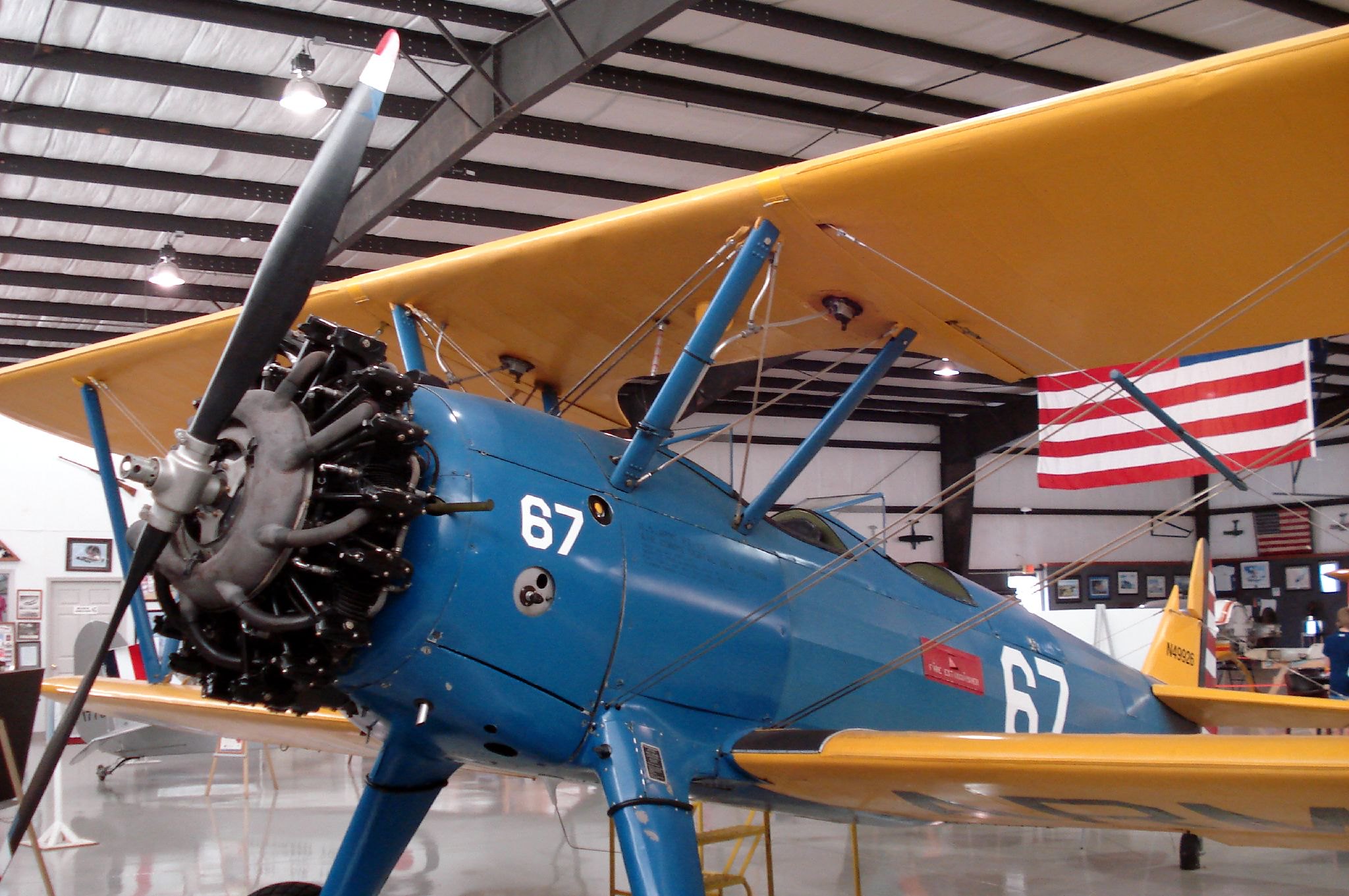 One of the nation’s best national theatres for kids, the Children’s Theatre of Charlotte welcomes around 300,000 visitors every year. Located in the heart of the city, the theatre offers imaginative productions and impressive educational programmes that cater for children of all ages. It offers at least 600 performances every season – more than any other theatre company in the state. All shows are produced for children but are guaranteed to stimulate curiosity and capture the imagination of the whole family. The theatre is home to a fully professional touring company, which is highly reputed across the United States.

Watch history come alive as hundreds of costumed characters recreate a 16th Century European Marketplace at this magically evocative festival. Taking place 20 miles north of Charlotte, the festival sees a 25-acre transformed into an ancient village, complete with castles, cottages, kitchens and pubs, all designed to look as they did many centuries ago. Visitors can enjoy non-stop activities and interactive entertainment including arts and crafts, games and rides, jousting knights on horseback, falconry, mermaids, fairies, dragons, feasting and plenty more. 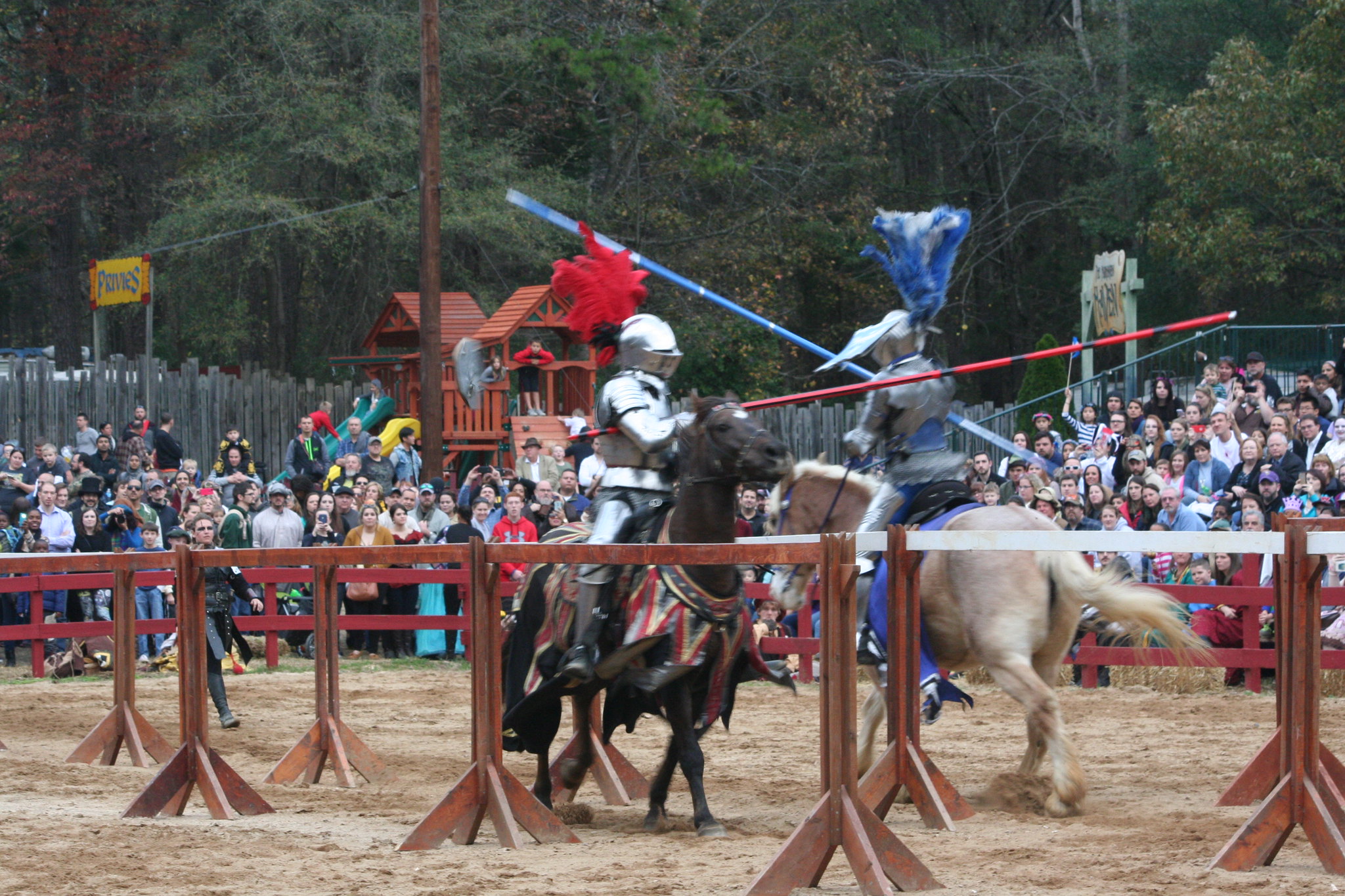 If you’ve insisted on dragging the kids around sight-seeing all day, then there’s no better reward than letting them loose in Freedom Park. Situated around 3 miles from downtown, the vast 98-acre park is home to a lake, a duck pond, playgrounds, and plenty of open space to run around and shed any excess energy. The park is also the site of the Discovery Place Nature Museum, which is well worth a visit, as well as hosting the annual Festival in the Park.